Dance is not only preferred based on Arts & Culture, it is also a Science. Yes, the bodies instinct to respond to rhythm is a primal one. Dance, in its various forms, can be traced back into almost every culture, embedded in social practice as means of communication and celebration.

In short, dancing stimulates the brains reward centers, such as the orbitofrontal cortex. Our bodies respond to the rhythms and the result is a wave of endorphins and serotonin, making it a highly effective form of stress-relief.

Unlike most forms of exercise, dance conditions the entire body, including those muscles which frequently escape a work-out. The significance of posture carries more than just aesthetic value. Just like yoga, dance targets the body’s entire energy system, integrating the physical and the spiritual. When we dance, our minds shift from the reactive state of consciousness that often governs us in our busy lives, into an altered state of consciousness known as the present

If you are thinking to join Arts and Science, then preferring Dance of Indian could be a better choice. Indian dances are divided into various cultures and traditions. North Indian and South Indian dances are different in expressions but common in output as all dances are co-related to Bhangimas and Bhavanas

To start Dance, first, why not we understand and do research of dances.

Kuchipudi is a village in Krishna district of the Indian state of Andhra Pradesh. Kuchipudi is also known as Kuchelapuram or Kuchilapuri.

Kuchipudi originated in the 17th century with the creation by Sidhyendra Yogi of the dance-drama Bhama Kalapam, a story of Satyabhāma, the charming but jealous wife of the god Krishna. The dance performance begins with the sprinkling of holy water and the burning of incense. 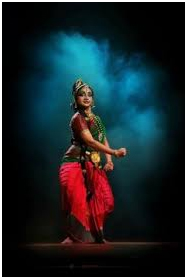 In Kuchipudi, the steps are divided into 2 series based on the rigor level. The first level consists of 30 steps. This level educates the student about the details involved in executing the basics correctly. Exercising the various aspects relating to different portions of the body is outlined here.

Narayanayati penned down a tarangini or a Sanskrit opera called ‘Sri Krishna Leela Tarangini’. The composition deals with the life of Lord Krishna from His childhood till His marriage to Rukmini and encompasses 12 Tarangams and includes 302 slokams, 153 songs and 31 choornikaas. Written as a libretto, this work apt for a dance drama has been performed by umpteen Indian classical dancers over the last two centuries. Sidhyendra Yogi followed his guru’s footsteps and wrote the play ‘Parijatapaharana’ also famous as ‘Bhama Kalapam’.

While a male character wears dhoti, a female character wears a colourful sari that is stitched with a pleated cloth which opens like a hand fan when the dancer stretches or bends her legs while portraying spectacular footwork. Make-up is generally light complimented with traditional jewellery of the region which adorns her hair, nose, ear, arms and neck. A light metallic waist belt made of gold or brass adorns her waist while a leather anklet with small metallic bells called ghunghroo is wrapped on her ankles that produce rhythmic sounds while she performs brilliant footwork. Her hair is neatly braided and often beautified with flowers or done in tribhuvana style that depicts the three worlds. Her eye expressions are highlighted by outlining them with black collyrium.

A Bharata Natyam performance is a visual representation and interpretation of all the arts of India, of music and rhythm, painting and sculpture, literature and poetry. It is a mirror of the Universe reflected through a series of emotional states. It is the final worship. Bharatanatyam also previously called Sadira Attam is a major form of Indian classical dance that The aspects of dance are mixed in varied form, to form diverse styles. The four prominently learnt bharatanatyam styles across the country are: Melathoor, kalashetra, vazhavoor, pandanalloor. Each style has its own sequence of basic steps, its of way presenting bhavam, ragam, thalam.is indigenous to Tamil Nadu. Bharatanatyam is the oldest classical dance tradition in India. 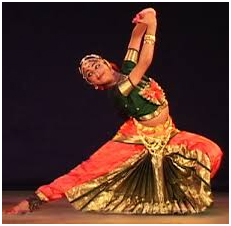 Bharatnatyam dance is almost 2,000 years old. It is believed that Bharatnatyam was revealed by Lord Brahma to Bharata, a famous sage who then codified this sacred dance in a Sanskrit text called the Natya Shastra. “it was in the mid thirties that E. Krishna Iyer first coined the term Bharatanatyam for the Sadir dance”.

Bharatanatyam is known for its grace, purity, tenderness, and sculpturesque poses. Lord Shiva is considered the god of this dance form. Today, it is one of the most popular and widely performed dance styles and is practiced by male and female dancers all over the world.

Given the precision and details of the dance, Bharat Natyam is as much a science as it is an art. It is considered an artistic yoga for revealing the spiritual through the physical, as dancers dissolve their identity into the rhythm and music of the dance, making their body an instrument for the experience of the soul. It is a Sadhana.

The philosophy on which Bharata Natyam is based acknowledges the oneness of all creation, and sees nature as the all-pervading reality. Bharata Natyam was created to balance rhythmic virtuosity with emotional interpretations.Given this, the two primary aspects of Bharata Natyam are, Nritta and Nritya.

Nritta: is developed and built on the vast network of adavus or basic units of movements. This aspect highlights the physical form of the dance. Danced to the recitation of rhythmic syllables known as jatis or to the singing of musical notes known as swaras, the dancer weaves linear, geometric patterns in space that are full of vitality and grace. The emphasis is on posture, balance, precision and rhythmic acumen.

Nritya: is developed and built on the Rasa Theory propounded in the Natya Shastra. The emphasis here is on feelings, sentiments and emotions. Rasa is a feeling or sentiment. The nine rasa or navarasa are the tools of learning that prepares the dancer to express the full range of human feelings and beliefs as explicitly or as subtly as the spoken word. This is one of the most defining aspects of Indian classical dance.

Sadhana is the Sanskrit word for discipline, dedication and commitment needed to obtain an outcome that is spiritually uplifting. A dance form of such detail, complexity and spirituality requires the level of commitment and dedication equivalent to Sadhana

Kathak is derived from the word ’Katha’ meaning story, and during the whole dance, the dancers narrate stories through their and expressions. Kathak is originated from Uttar Pradesh in north India. Kathak is one of the eight forms of Indian classical dances, originated from India. This dance form traces its origins to the nomadic bards of ancient northern India, known as Kathakars or storytellers.

Kathak actually dates back to 4th century BC where sculptures of Kathak dancers were engraved in written scripts and sculptures in ancient temples. 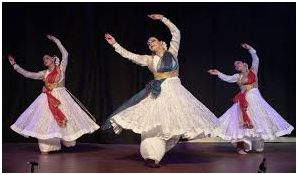 Kathak gives emphasis on poses, expressions, grace, hand, eye and body movements and footwork. This makes your body look younger, loose body weight and brings lot of excitement in life. Within no time you will discover that you have become more active and full of energy.

Kathakali is different from a similar-sounding Kathak, though both are Indian classical dance traditions of "story play" wherein the stories have been traditionally derived from the Hindu epics and the Puranas.

Compared with other genres of classical dance, Kathak is difficult. This is explained by Reshmi Kaur Oberoi: “Kathak is a complete dynamic theatre, not compromised to, but rather co-existed in the dance form which has made many more doors open, outside of the academic life of the dancer; myself Physical benefits: Practicing Kathak daily improves the bodily posture and overall body balance of your growing child and not just that it also strengthens the eye and neck muscles as these are used a lot during the dance moves. ... This boosts your child's confidence and gives her an upper edge over other children. The same Brij Mohan, better known as Kathak exponent Birju Maharaj, is being bestowed the Balasaraswati Scripps Award for Artistic Excellence this Saturday. The story of Birju Maharaj is not just of an artist but of a man and his family that saved and reinstated an entire tradition—the Lucknow gharana of Kathak.

Mohini attam, (Malayalam: “dance of the enchantress”)also spelled mohiniattam or mohiniyattam, semiclassical dance form from the state of Kerala, southwestern India. The dance is performed by women in honour of the Hindu god Vishnu in his incarnation as the enchantress Mohini. 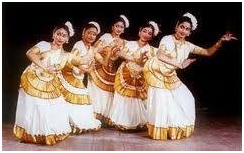 It is believed that this dance form originated in the 16th century, and took off eventually in the 19th century under the reign of Swathi Thirunal, who was the king of the state of Travancore, which is the Southern part of Kerala.

The theme of mohiniyattam is love and devotion to god and the hero of most performances is Lord Vishnu or Lord Krishna. Apart from mythology, mohiniattam also contains a range of themes from nature. It follows the Hastha Lakshanadeepika, a textbook for Mudras (hand gestures).

Bollywood dance originated in India, around Bombay, in the 20th century and is dancingthat we now see in Indian films. By the 1980s Bollywood started to incorporate Western dance styles such as Hip – Hopdance, using bigger troupes, more intricate costumes and dancing in many different locations.

Bollywood dancing is an expressive form of movement based around the popular Indian film genre. Fusing classical Indian steps with folk, Latin and hip-hop styles, it offers a fast-moving and vivacious dancing workout that is great for enjoyable group exercise. 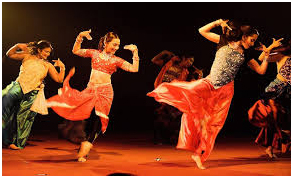 The purpose of Bollywood dance is to tell a story or send out a message. Bollywood dancing is mostly in Bollywood movies because the dance adapts to the story line. For example if a girl falls in love with a boy, the dance will be about a girl chasing around a boy, while she is dancing.

KALAANJHARI to become a stepping stone for success of every Individual, who is a Lover of Art & Culture